The occurrence of large damaging earthquakes near densely populated regions can result in dramatic numbers of human casualties, damage to key infrastructure (e.g. hospitals, roads) and the loss of accommodation for hundreds of thousands citizens. The largest earthquake magnitudes on Earth reach magnitudes M~9 and exclusively occur along subduction zones. In contrast, strike-slip transform faults tend to rupture in earthquakes with magnitudes not exceeding M~8 [e.g. Wesnousky, 1988; Martínez-Garzón et al., 2015; Bohnhoff et al., 2016]. However, the latter generally pose a larger hazard and risk since they can rupture along the Earths’ surface and due to their eventual proximity to densely-populated mega-cities. Well-known examples are the San Francisco Bay Area and the Los Angeles basin along the San Andreas Fault in California or the Istanbul-Marmara region near the North Anatolian Fault Zone in Turkey. High-resolution monitoring and near-real time analysis of ongoing seismic and aseismic deformation in these areas is an essential pre-requisite to better determine the local seismic potential and to optimize risk-reduction infrastructure.
A large focus of SAIDAN is the study of tectonic deformation at the North Anatolian Fault. The North Anatolian Fault Zone (NAFZ) in Turkey represents a ~1100 km long right-lateral strike-slip plate boundary [Barka et al., 2002; Sengör, 2005] slipping at an average rate of 20-30 mm/yr [McClusky et al., 2000; Ergintav et al., 2014]. The Sea of Marmara region in northwestern Turkey currently represents a ‘seismic gap’ with a high probability for an M>7 earthquake in direct proximity to the Istanbul Metropolitan region with its >13 million inhabitants. At its eastern portion close to Istanbul (Princes Islands fault), a locked fault portion representing a potential nucleation point for the pending Marmara earthquake was identified from absence of microseismicity and from GPS data [Bohnhoff et al., 2013; Ergintav et al., 2014]. Towards the western part of the Marmara section there are first indications for fault creep [Schmittbuhl et al., 2016; Bohnhoff et al., in press]. However, to date, no information on potential low-frequency signals embedded in the crustal deformation of the whole region exists. The area immediately to the south of the locked Princes Islands fault recently hosted a MW 4.2 earthquake that showed pre-shock activity indicating an emergent failure process [Malin et al., in review].

We analyze a large transient strainmeter signal recorded at 62.5 m depth along the southern shore of the eastern Sea of Marmara region in northwestern Turkey. This region represents a passage of stress transfer from the Izmit rupture to the Marmara seismic gap. The strain signal was recorded at the Esenkoy site by one of the ICDP-GONAF (International Continental Drilling Programme – Geophysical Observatory at the North Anatolian Fault) strainmeters on the Armutlu peninsula with a maximum amplitude of 5 microstrain and lasting about 50 days. The onset of the strain signal coincided with the origin time of a MW4.4 earthquake offshore Yalova, which occurred as part of a seismic sequence including eight MW≥3.5earthquakes. The MW4.4 event occurred at a distance of about 30km from Esenkoy on June 25th 2016 representing the largest earthquake in this region since 2008. Before the event, the maximum horizontal strain was subparallel to the regional maximum horizontal stress derived from stress inversion of local seismicity. During the strain transient, we observe a clockwise rotation in the local horizontal strain field of about 20◦. The strain signal does not correlate with known environmental parameters such as annual changes of sea level, rainfall or temperature. The strain signal could indicate local slow slip on the Cinarcik fault and thus a transfer of stress to the eastern Marmara seismic gap.

AN EMERGENT FAILURE PROCESS FOR A M4.2 EARTHQUAKE OFFSHORE ISTANBUL

On June 25, 2016, an Mw4.2 earthquake took place offshore Istanbul, Turkey. It occurred on a fault system that is likely to rupture in an M>7 event in the next decades. In the 3 days before and 2 after, a total of at least 61 other earthquakes – at least 18 before – came from the mainshock location. The data are from a test of the borehole-seismic arrays of the Geophysical Observatory on the North Anatolian Fault (GONAF). This seismic sequence reflects the activity reported in laboratory rock deformation experiments, and recently seen in plate-boundary earthquakes. The impression is of otherwise-stochastic failures that ended up interactively unload stress concentrations, including an emergent, through-going, rupture. It suggests that real-time waveform cross-correlation of GONAF data may provide instances of short-term earthquake forecasts for this region. 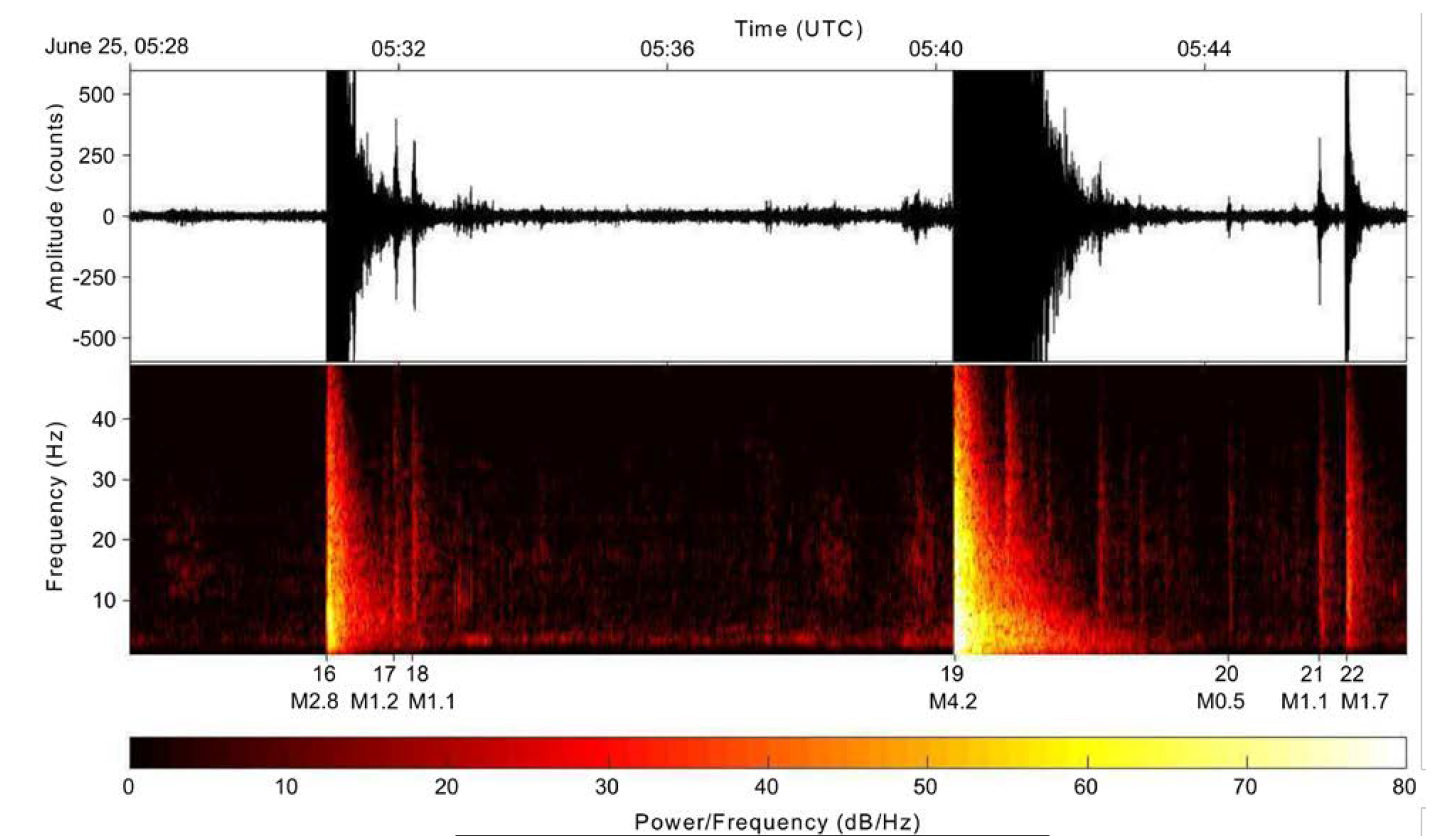 SPATIOTEMPORAL VARIÀTIONS OF STRESS AND STRAIN PARAMETERS IN THE SAN JACINTO FAULT, CALIFORNIA

We analyze the background stress field around the
San Jacinto fault zone (SJFZ) in Southern California with a refined
inversion methodology using declustered focal mechanisms of
background seismicity. Stress inversions applied to the entire fault
zone, and three focus areas with high level of seismicity, provide
three-dimensional distributions of the maximum horizontal compression
direction (SHmax), principal stress plunges, and stress ratio. The results are compared with coseismic strain parameters derived from direct summation of earthquake potencies and b values of frequency–size event statistics. The main stress regime of the SJFZ is strike-slip, although the northwest portion near Crafton Hills displays significant transtension. The SHmax orientation rotates clockwise with increasing depth, with the largest rotation (23) observed near Crafton Hills. The principal stress plunges have large rotations below * 9 km, near the depth section with highest seismicity rates and inferred brittle–ductile transition zone. The rotations produce significant deviations from Andersonian strike-slip faulting, likely generating the observed increased dip-slip faulting of relatively deep small events. The stress ratio parameters and b-value results are consistent with
increasing number of dip-slip faulting below * 9 km. The derived
coseismic strain parameters are in good agreement with the stress
inversion results. 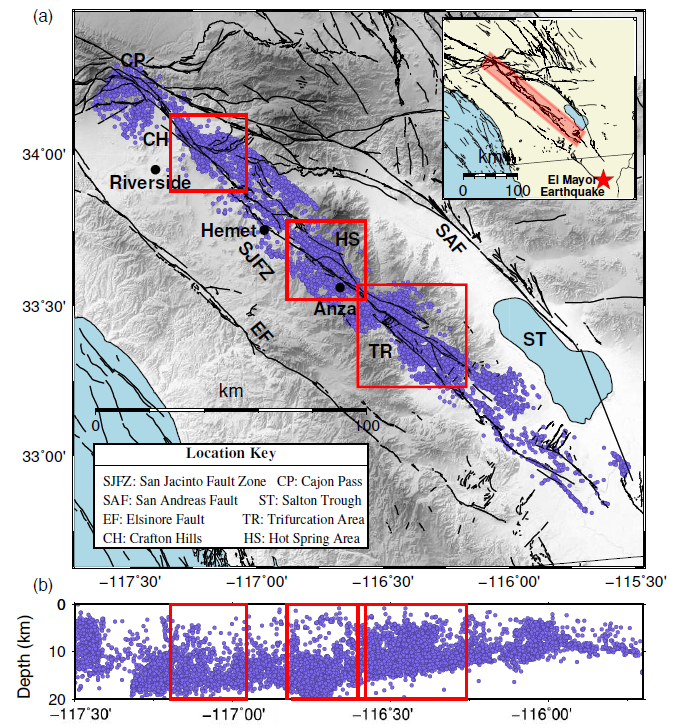 A UNIFIED EARTHQUAKE CATALOG FOR THE SEA OF MARMARA REGION, TURKEY
We present a refined hypocenter catalog for the Sea of Marmara. For the first time we combine the different regional permanent networks thereby optimizing azimuthal coverage and adopt a refined technique to determine precise onset times for the different body waves. Our catalog covers a ten-year time interval (2006-2016) containing optimized and relocated hypocenter locations for 4,407 earthquakes with an unprecedented regional magnitude of completeness of Mc = 2.0. The epicentral distribution delineates the Marmara Section as the northern NAFZ branch as the seismically most active fault strand. Single-event focal mechanisms for the larger (M up to 4.5) events indicate that currently both strike-slip and normal faulting occurs, confirming the transtensional setting of the region. 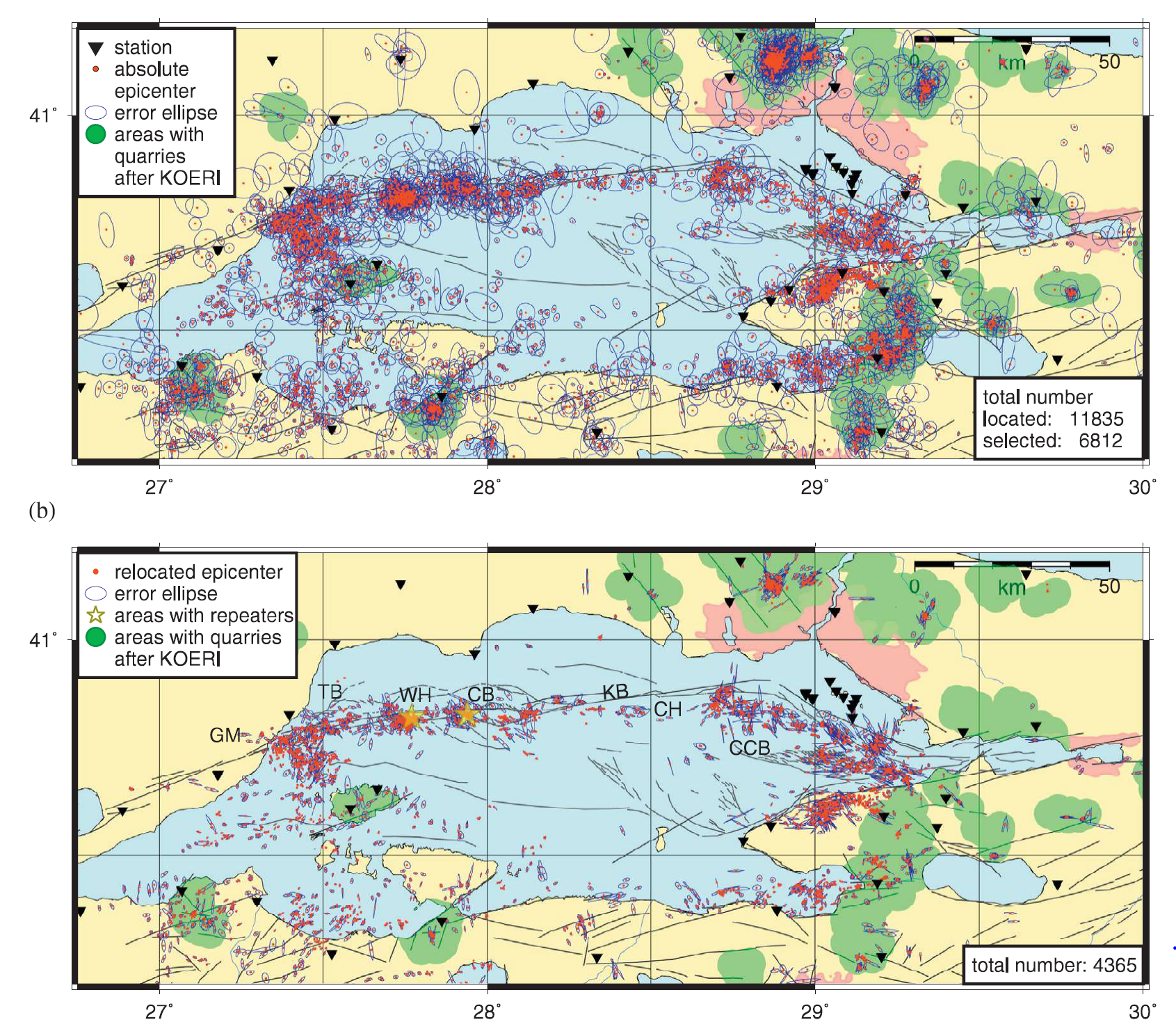 VARIATIONS OF B-VALUE AT DIFFERENT STAGES OF THE SEISMIC CYCLE ALONG THE NAFZ
We studied spatiotemporal -value variations along the North Anatolian Fault Zone in northwestern Turkey with a focus on the combined 1999 Izmit and Düzce rupture and the eastern Sea of Marmara. We used a local seismicity catalog of the Izmit-Düzce region covering a time span from 2.5 years prior to the Izmit until 14 months after the Düzce mainshock and a four-year hypocenter catalog in the eastern Sea of Marmara. We consistently calculated moment magnitudes to ensure a homogeneous dataset and applied strict quality criteria. This allows studying variations of -values throughout the region and at different stages of the seismic cycle. With a standard gridding technique -value maps, depth sections and time series were calculated which reveal a very heterogeneous -value distribution in the study area. The variety of -value observations cannot be interpreted unambiguously, given that the -value most likely depends on a combination of fault-zone characteristics like local stress conditions, heterogeneity of the crust and damage distribution. By presenting a comprehensive set of possible interpretations we point out that a biased discussion of the results towards stress or another individual parameter may lead to erroneous conclusions. Furthermore, the applied data discretization scheme influences the appearance of the final -value distribution leading to potential misinterpretations. 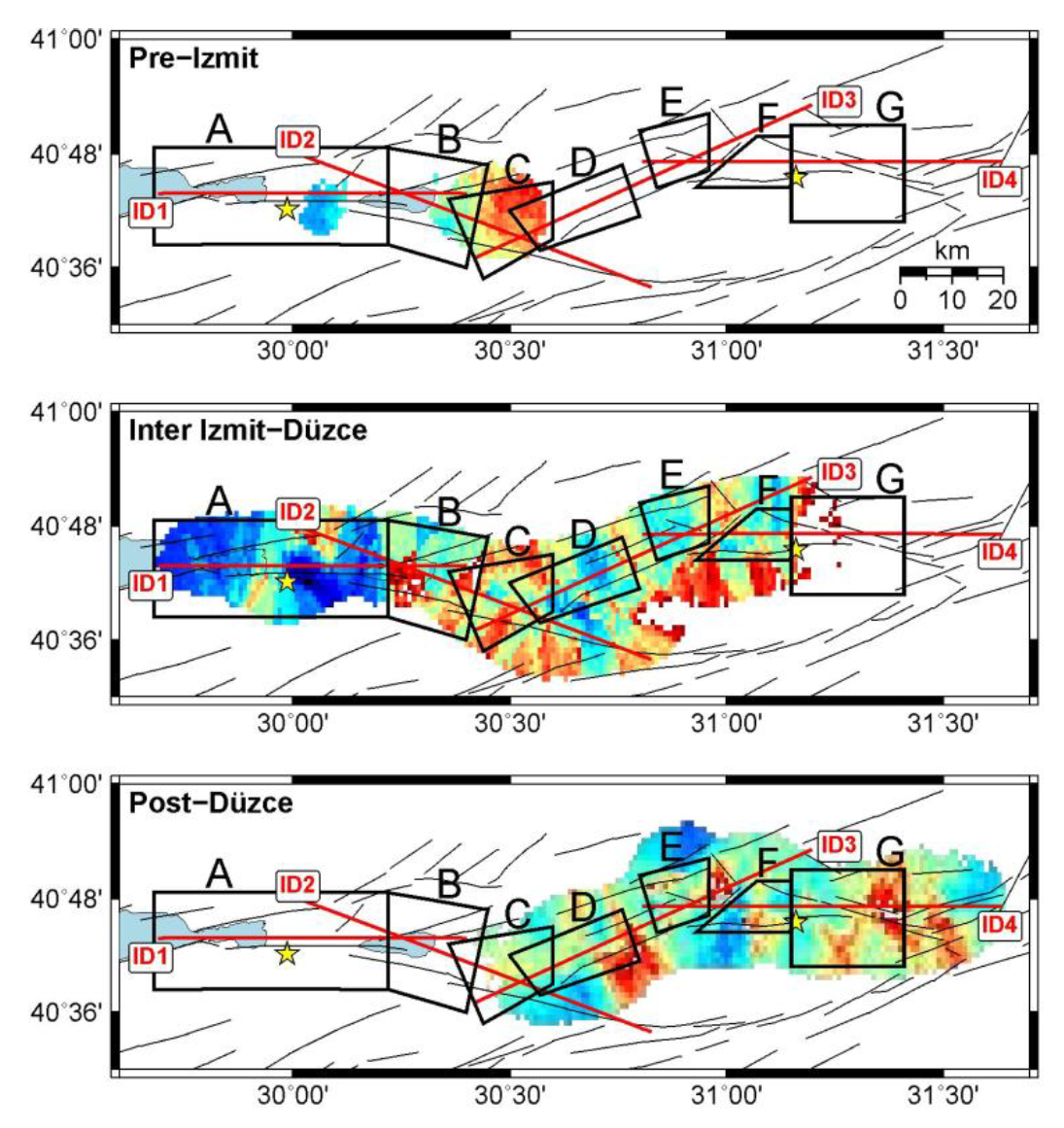 REPEATING MARMARA SEA EARTHQUAKES: INDICATION FOR FAULT CREEP
Discriminating between a creeping and a locked status of active faults is of central relevance to characterize potential rupture scenarios of future earthquakes and the associated seismic hazard for nearby population centres. In this respect, highly similar earthquakes that repeatedly activate the same patch of an active fault portion are an important diagnostic tool to identify and possibly even quantify the amount of fault creep.
Here, we present a refined hypocentre catalogue for the Marmara region in northwestern Turkey, where a magnitude M up to 7.4 earthquake is expected in the near future. Based on waveform cross-correlation for selected spatial seismicity clusters, we identify two magnitude M ∼ 2.8 repeater pairs. These repeaters were identified as being indicative of fault creep based on the selection criteria applied to the waveforms. They are located below the western part of the Marmara section of the North Anatolian Fault Zone and are the largest reported repeaters
for the larger Marmara region.
While the eastern portion of the Marmara seismic gap has been identified to be locked, only sparse information on the deformation status has been reported for its western part. Our findings indicate that the western Marmara section deforms aseismically to a substantial extent, which reduces the probability for this region to host a nucleation point for the pending Marmara earthquake. This is of relevance, since a nucleation of the Marmara event in the west and subsequent eastward rupture propagation towards the Istanbul metropolitan region would result in a substantially higher seismic hazard and resulting risk than if the earthquake would nucleate in the east and thus propagate westward away from the population centre Istanbul. 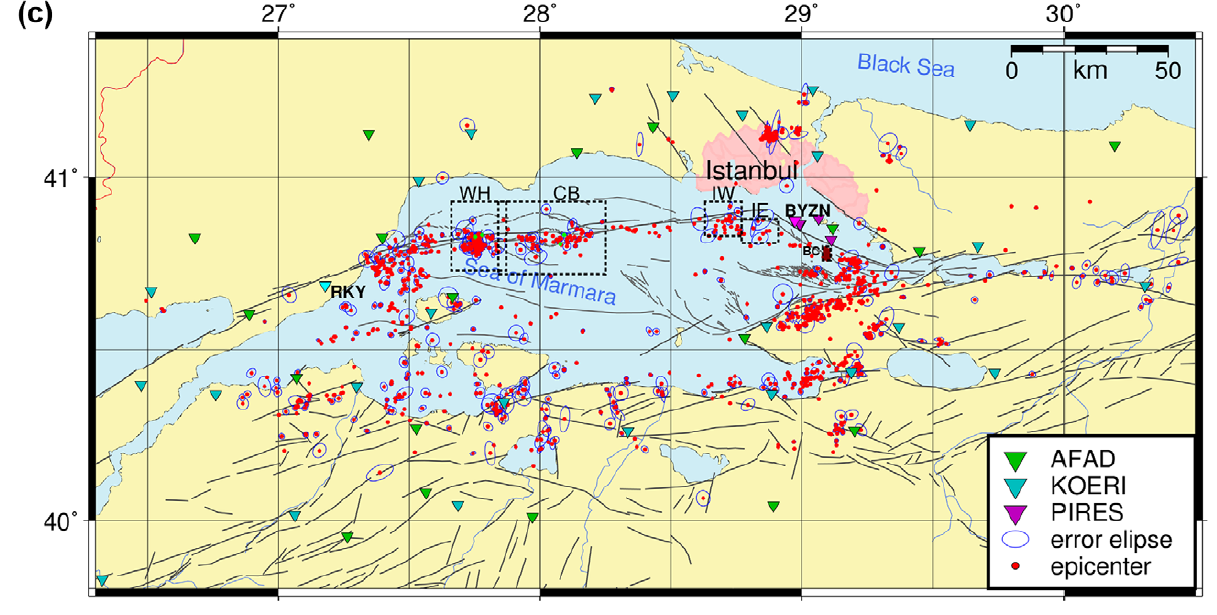 MAXIMUM EARTHQUAKE MAGNITUDES ALONG DIFFERENT SECTIONS OF THE NAFZ
Constraining the maximum likely magnitude of future earthquakes on continental transform faults has fundamental consequences for the expected seismic hazard. Since the recurrence time for those earthquakes is typically longer than a century, such estimates rely primarily on well-documented historical earthquake catalogues, when available. Here we discuss the maximum observed earthquake magnitudes along different sections of the North Anatolian Fault Zone (NAFZ) in relation to the age of the fault activity, cumulative offset, slip rate and maximum length of coherent fault segments. The findings are based on a newly compiled catalogue of historical earthquakes in the region, using the extensive literary sources that exist owing to the long civilization record. We find that the largest M7.8-8.0 earthquakes are exclusively observed along the older eastern part of the NAFZ that also has longer coherent fault segments. In contrast, the maximum observed events on the younger western part where the fault branches into two or more strands are smaller. No first-order relations between maximum magnitudes and fault offset or slip rates are found. The results suggest that the maximum expected earthquake magnitude in the densely populated Marmara-Istanbul region would probably not exceed M7.5. The findings are consistent with available knowledge for the San Andreas Fault and Dead Sea Transform, and can help estimating hazard potential associated with different sections of large transform faults. 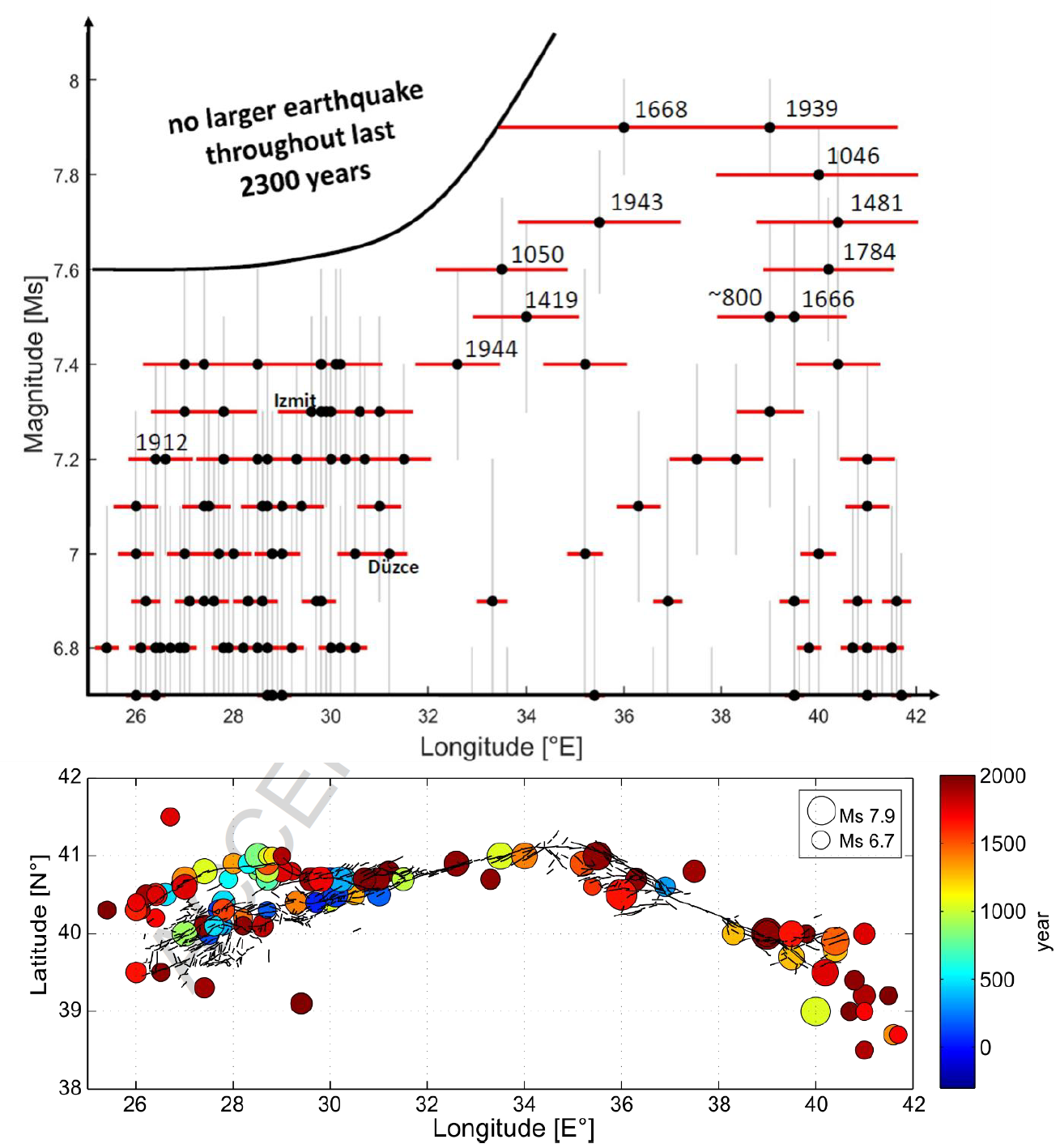 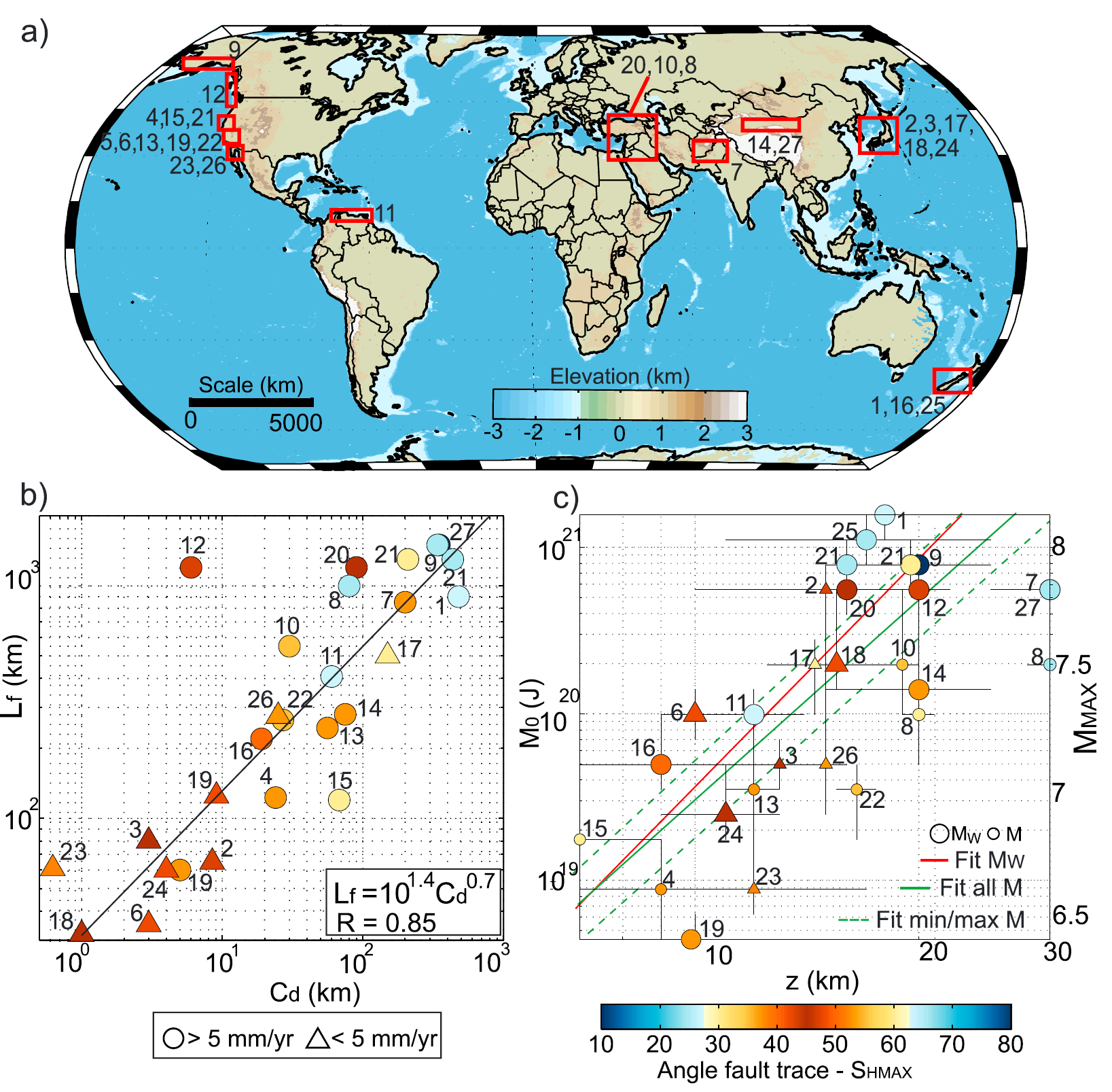