Fluid-injection into the subsurface in the frame of reservoir-engineering activities for hydrocarbon and geothermal energy production has resulted in the reactivation of previously unknown critically stressed and thus hazardous faults. In Oklahoma and Kansas (US), a dramatic increase of induced seismicity including four M>5 earthquakes has been seen over the last years. This increased the seismic hazard of the nearby settlements and key-infrastructure, triggering significant public awareness and acceptance issues. SAIDAN aims at investigating the earthquake physics and quantifying the proportion of seismic versus aseismic slip release in fluid-injection environments and investigating the resulting maximum magnitude of the induced earthquakes and the subsequent hazard. To do that, geothermal environments such as The Geysers and Salton Sea are investigated, as well as regions where fluid-induced seismicity is prominent, such as in southern Kansas.

Some of the highlights from our recent studies are the following:

COMPARATIVE STUDY OF EARTHQUAKE CLUSTERS AT GEOTHERMAL FIELDS IN CALIFORNIA
Earthquake clustering properties are investigated in relation to fluid balance H(t) (the difference of fluid injection and production rates) using about nine years of data from The Geysers (both the entire field and a local subset), Coso, and Salton Sea geothermal fields in California. Individual earthquake clusters are identified and classified using the nearest-neighbor approach of Zaliapin and Ben-Zion (2013a, 2013b). These are used to calculate nine complementary cluster statistics as time series with a step of about one month. Three alternative techniques (moving window correlation, analysis of variance, and regression) are employed to assess the relations between (possibly nonstationary) time series of cluster statistics and H(t). A total of 108 pairwise relations between cluster statistics and H(t) are analyzed to clarify effects of fluid activities on seismicity in different places. The seismic clustering response to the fluid balance differs among the examined fields. The Geysers and Salton Sea areas display the highest and lowest clustering responses, respectively. The proportion of clusters consisting of a single event with no offspring (singles) is correlated significantly with H(t) at all examined data sets, with a lower proportion of singles during periods of high fluid balance. This may reflect increased susceptibility to earthquake triggering in time intervals with high injection rates. The background seismicity rates significantly increase with H(t) at the Geysers and Coso, while an opposite relation holds at the Salton Sea. This could be related to the high structural and tectonic complexity at the Salton Sea compared to the other two geothermal fields.

EARTHQUAKE SOURCE MECHANISMS AT THE SALTON SEA GEOTHERMAL FIELD, CALIFORNIA
We investigated source mechanisms of 80 earthquakes at the Salton Sea geothermal field in southern California. The performance of two moment tensor inversion techniques (P-wave first-motion amplitudes vs full waveforms) was compared. Only a combination of P-wave amplitude inversion and moment tensor refinement techniques enables a robust determination of the source types. We find that most shallow earthquakes display statistically significant non-double-couple components. Largest volumetric components are inferred for events located near active injection and production wells and primarily correspond to a normal-faulting regime. In contrast, strike-slip events are dominated by shear motion, and their locations extend well beyond the reservoir. 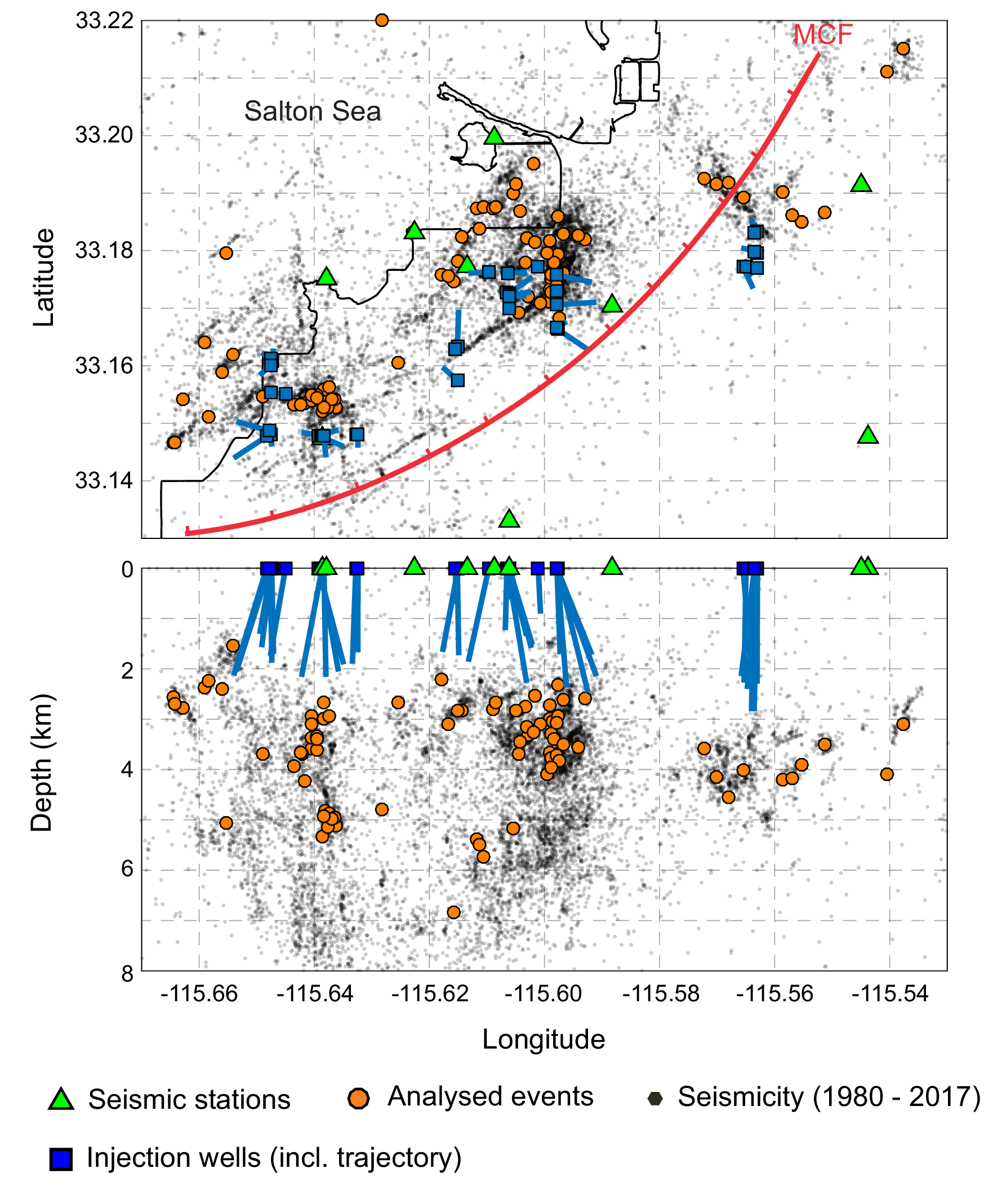 FRACTURING PROCESSES DURING WATER-INJECTION EXPERIMENT, ÄSPÖ, SWEDEN
We investigate the source characteristics of picoseismicity recorded during a hydraulic fracturing in-situ experiment performed in Äspö Hard Rock Laboratory, Sweden. The experiment consisted of six stimulations driven by three different water injection schemes. The fracturing process was monitored with a variety of seismic networks including broadband seismometers, geophones, high-frequency accelerometers and acoustic emission sensors. The combined seismic network allowed for detection and detailed analysis of 196 seismic events with moment magnitudes MW<-3.5 (source sizes of dm- scale) that occurred during the stimulations and shortly after. We observe spatio-temporal migration of 34 events (propagation away and towards wellbore injection interval) and temporal transitions in source mechanisms (opening – shearing – collapse) both being controlled by changes in fluid injection pressure. The total radiated seismic energy is extremely low with respect to the product of injected fluid volume and pressure, and it correlates with the hydraulic energy rate. 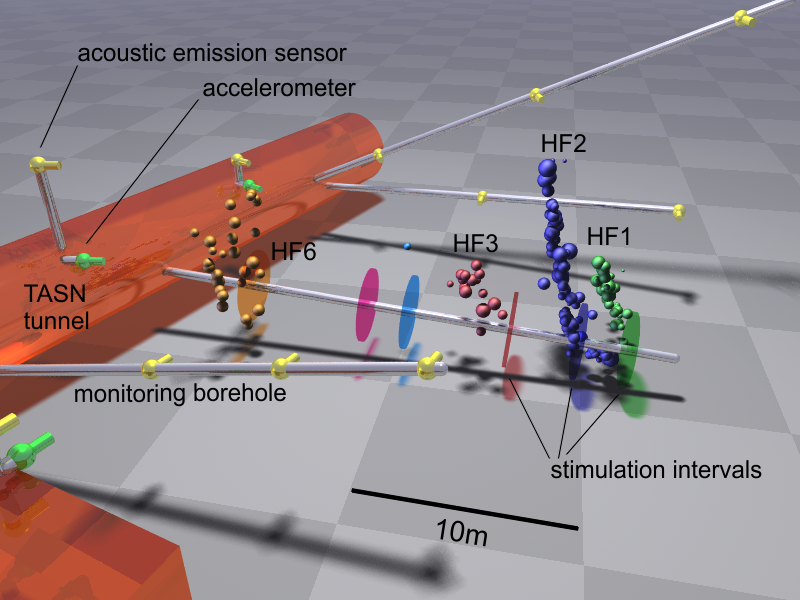 FULL MOMENT TENSOR ANALYSIS OF INDUCED SEISMICITY FROM THE GEYSERS
Analysis of 869 well-constrained full moment tensors of fluid-induced seismicity (Mw 0.8–3.5) from The Geysers geothermal reservoir in northern California were investigated revealed significant non-double-couple components (>25%) for about 65% of the events. Volumetric deformation is governed by cumulative injection rates with larger non-double-couple components observed near the wells and during high injection periods. Source mechanisms are magnitude dependent and vary significantly between faulting regimes. Our results imply that source processes and magnitudes of fluid-induced seismic events are strongly affected by the hydraulic operations, the reservoir stress state, and the faulting regime.

CHARACTERISTICS OF INDUCED SEISMIC EVENTS FROM THE GEYSERS
Spatio-temporal trends in statistical, source, and stress characteristics of 1776 induced seismic events from The Geysers geothermal field were analyzed for a period of 7 years. The temporal, spatial, and source characteristics were attributed to changes in the fluid injection rates and the fluid migration toward greater depths, involving increasing pore pressure. The seasonal changes of injection rates were found to directly impact the shape and spatial extent of the seismic cloud. A tendency of larger seismic events to occur closer to injection wells and a correlation between the spatial extent of the seismic cloud and source sizes of the largest events was observed, suggesting geometrical constraints on the maximum magnitude and its correlation to the injection rate and volume of fluid present in the reservoir. 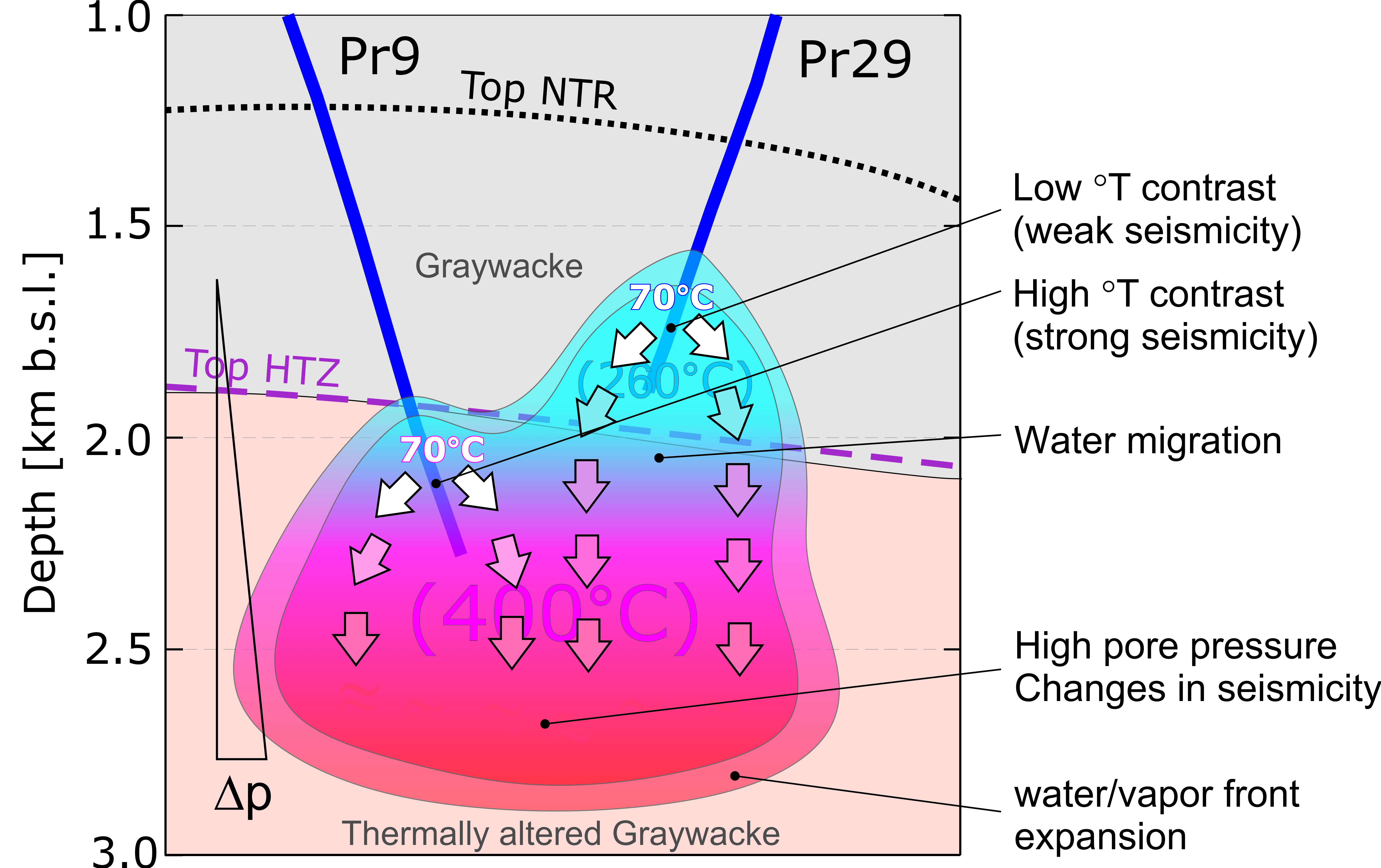 FLUID INJECTION CONTROLS ORIENTATION OF REACTIVATED FAULTS AT THE GEYSERS
We analyze the fault geometries from seismicity induced by fluid injection at The Geysers geothermal field. The consistency of these faults with the local stress field is investigated using (1) the fault instability coefficient I comparing the orientation of a fault with the optimal orientation for failure in the assumed stress field and (2) the misfit angle β between slip vectors observed from focal mechanisms and predicted from stress tensor. We find that faults activated by fluid injection may display a broad range in orientations. About 72% of the analyzed seismicity occurs on faults with favorable orientation for failure with respect to the stress field.
However, a number of events are observed either to occur on severely misoriented faults or to slip in a different orientation than predicted from stress field. These events mostly occur during periods of high injection rates and are located in proximity to the injection wells. High seismic activity and largest magnitudes occur on favorably oriented faults with large instability coefficients and low slip misfit angles. 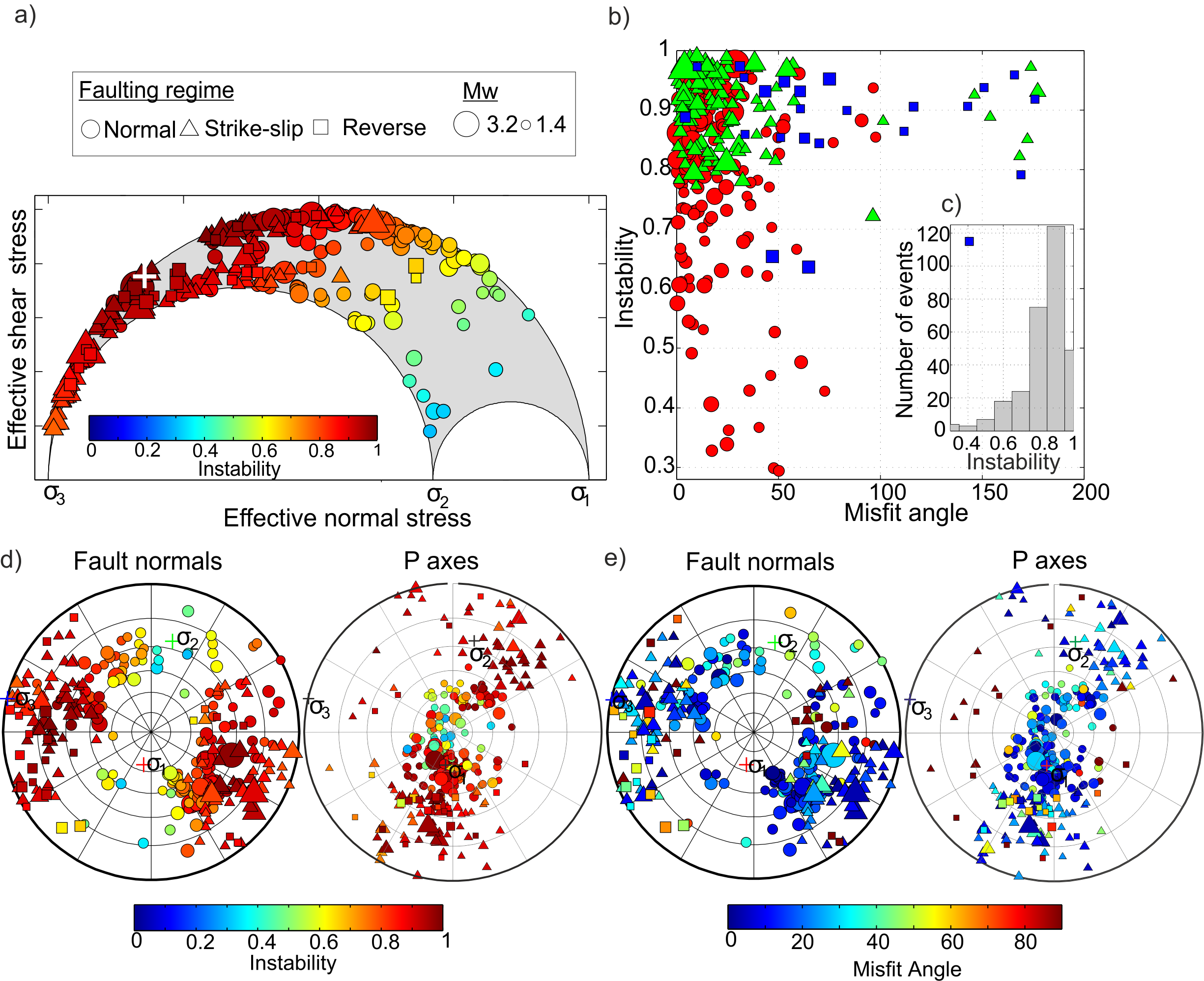